We held our first Daily Office retreat August 20-23 at Waycross Camp and Conference Center in the Diocese of Indianapolis, where the Rt. Rev. Catherine M. Waynick is the Bishop; she also serves as our Episcopal Visitor. We enjoyed being there and the food was good!

Amy Paget, our retreat facilitator, asked, “What are your hopes and dreams for this retreat?” Her cloud poster put us in mind of members who couldn’t attend. (Sister Julian, C.G.) 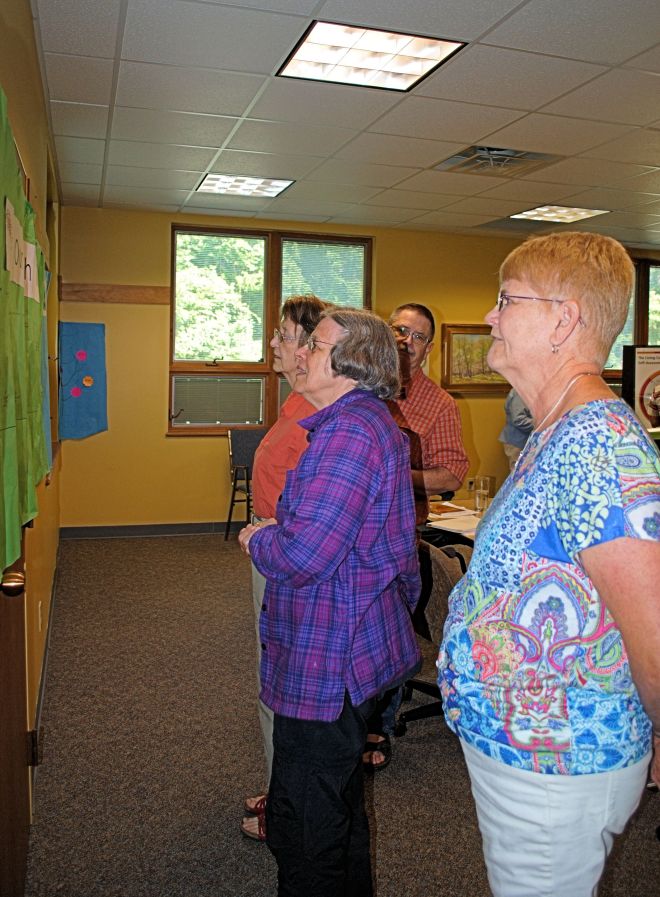 Amy came ready with a timeline marked with milestones for both our Office site and the wider church in the 20th century, then asked us to add some of our own personal faith events. Several of us wrote dates for marriages, births, higher education, etc. Our first Daily Office website debuted 11 years ago, almost to the day; our first blog, which is today’s main site, premiered two years later. (Sister Julian)

Writing down our own faith events was one thing; reading everyone else’s was another. (Sister Julian) 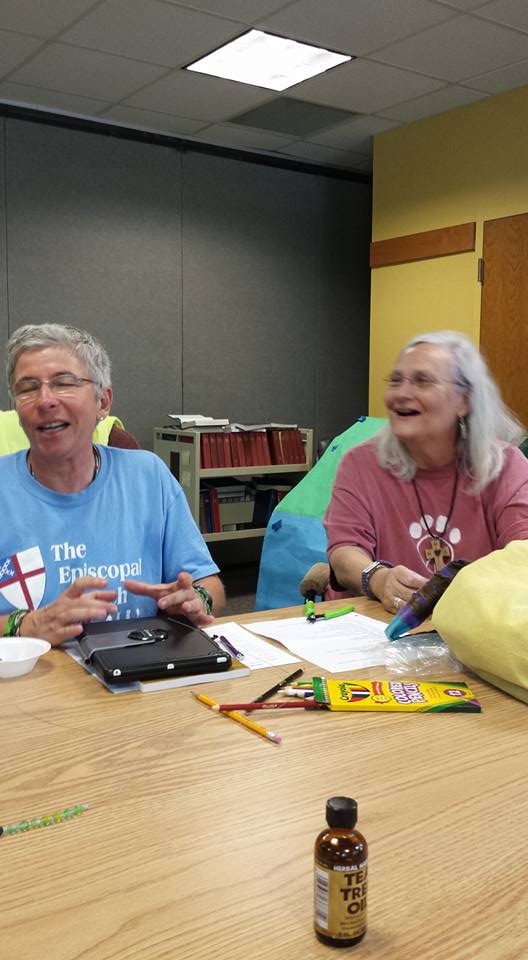 There may have been some divorces on that timeline too, as well as jobs we’ve held that affected our faith. (Sister Julian) 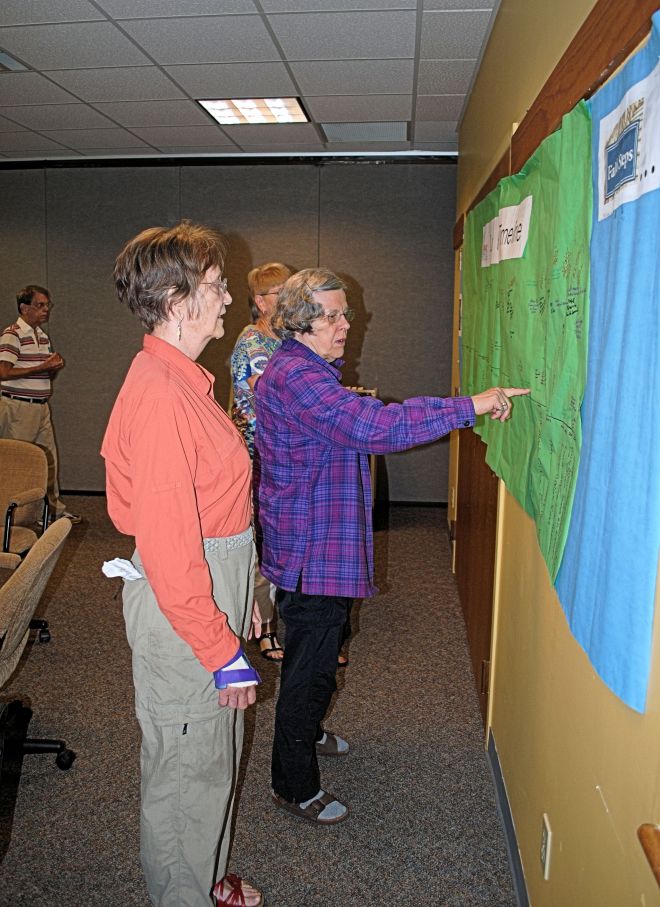 The sitting area off the lobby at Waycross was our favorite gathering place; we often used the internet there and participated in Friday morning’s webcast. (Sister Julian) 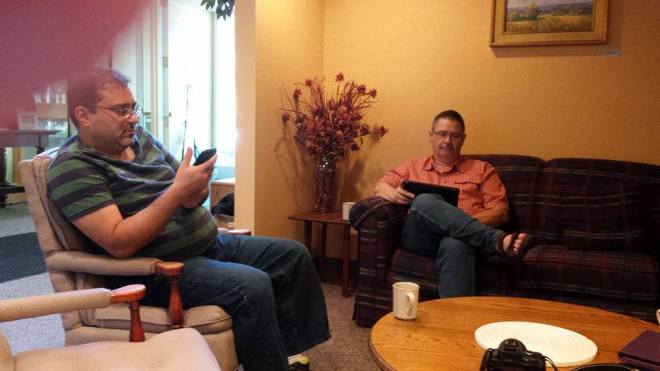 David & Jerry during the webcast. Also the photographer’s finger. (Linda)

Joan tuning in next to the entrance to conference room A, the biggest at Waycross. Several of us found we couldn’t use our phones or e-mail, but others had less of a problem. (Sr. Julian)

Maria gathered us together to send get-well wishes to her Bishop, +Wayne Smith of Missouri, who was undergoing a surgical procedure that day. He is a big believer in the Daily Office as a discipline, and as a postulant for ordination in his diocese, Maria was hoping this selfie would cheer him up. He wrote her back and said it did! 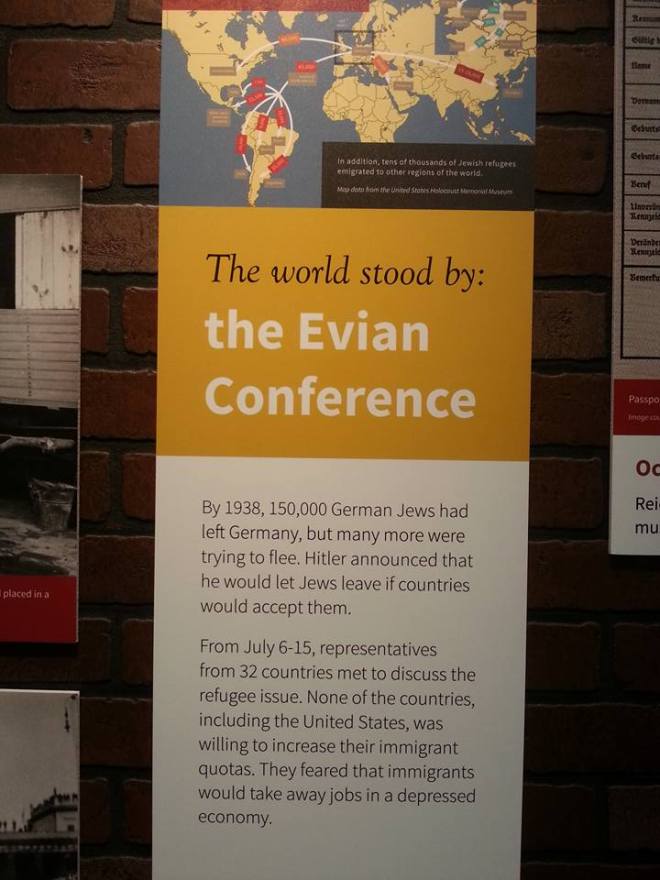 An exhibit at Eva Moses Kor’s CANDLES Holocaust Museum in Terre Haute, Indiana, which some of us got to visit; everyone watched the documentary of her trip to Auschwitz, “Forgiving Dr. Mengele.” (Amy J. Paget) 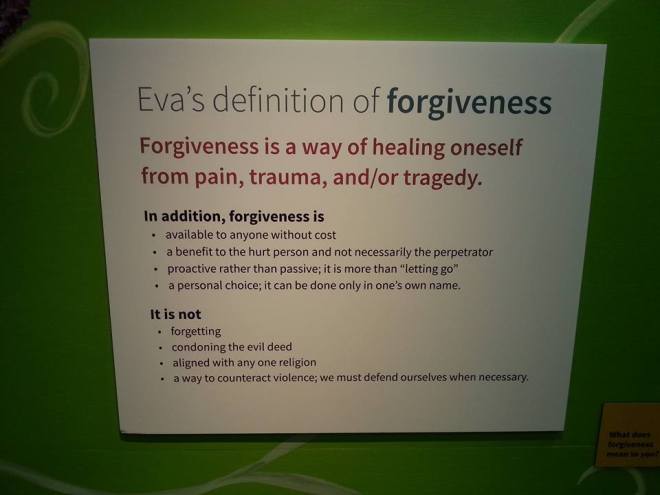 Eva Kor on forgiveness. The museum, which she started on a shoestring with a focus on Mengele’s infamous twins experiments, has gained considerable community support over the years, survived an arson fire that destroyed it, and been rebuilt better than ever. (Amy) 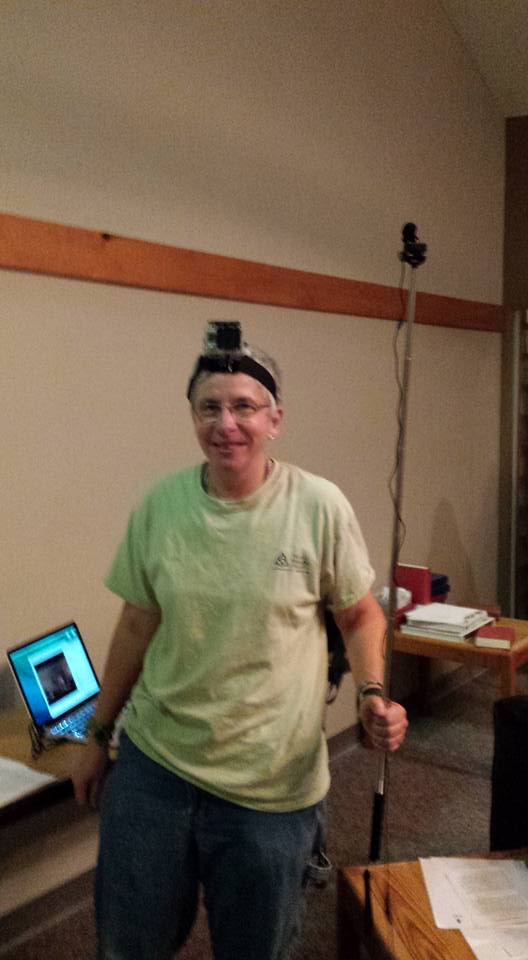 Maria with a GoPro video camera strapped to her head Friday night before our first-ever Eucharist. She only got a few seconds of video before the connection quit; Josh should have been manning his laptop to restart it, but he was more into worship mode than production. Mother Gwen celebrated, and after the visit to the CANDLES Holocaust Museum, the worship was both somber and exquisite. (Linda)

Building Anglican rosaries in our meeting room Saturday morning. Maria was a great teacher who came prepared with lots of different beads and crosses to choose from. It helps to have an experienced teacher who knows how to lead a classroom. (Linda)

Josh was terrible at stringing beads and cussed for half an hour before he finally traded beads with tiny holes for others that were a little bigger. Mr. Pious he was not, while next to him, Jerry was a one-man assembly line. (Linda) 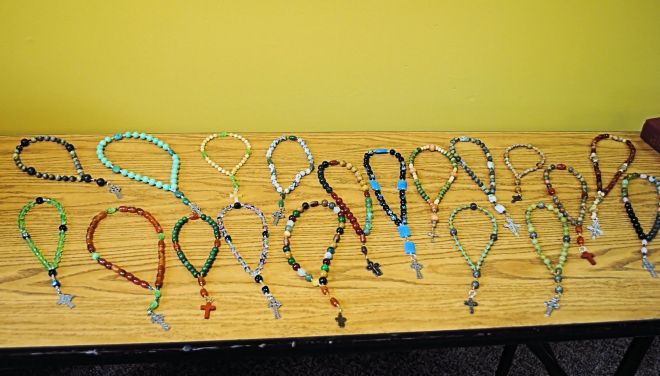 Our finished rosaries. Some were taken home as gifts, but Josh ended up with an extra ten to send to members who write in with prayer requests. (Linda)

The director of Waycross, Van Beers, led us on a nature walk Saturday morning; Linda took this shot of Josh & Gwen. 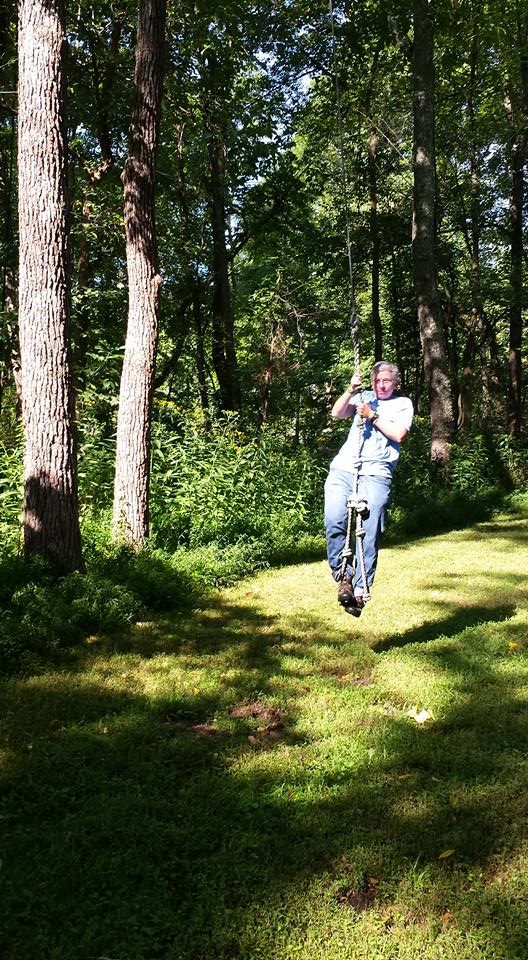 Waycross hosts a variety of events all year for the Diocese of Indianapolis and many other groups. Its summer camps for kids are well-known and the grounds are filled with fun things to do. When Maria came across this tree swing she couldn’t wait to try it. (Linda)

A few feet away a conventional swing set provided fun to Gwen and Scotty; Maria was the instigator. Scotty toughed out the whole weekend despite a severely broken arm that kept her in pain. But that gave rise to our impromptu meme; whenever one of us said something weird, everyone else chimed in, “It’s the drugs!” (Linda)

David trying out his Flying Wallendas act on the rope course; fortunately it is low to the ground. (Linda)

Linda found this shale formation above the creek bed interesting and said, “We don’t have this back home.” She’s retired from the oil and gas business, and knows that shale formations often hold natural gas. Van explained that a very large formation of top quality Bedford limestone is located a few miles south of Waycross, and Josh, a native Hoosier, bragged that Bedford stone built the Empire State Building and the Lincoln Memorial. (Linda)

Close by the creek and play area is Waycross’s indoor chapel, with its wall of windows to bring in the outdoors. (Linda)

Jerry was one of the readers for our Saturday night Eucharist. I’m not sure he understands to this day how important he is to us; he’s soft-spoken but not a shrinking violet, with a depth of faith and experience that we love, but don’t always tell him about. (Josh) 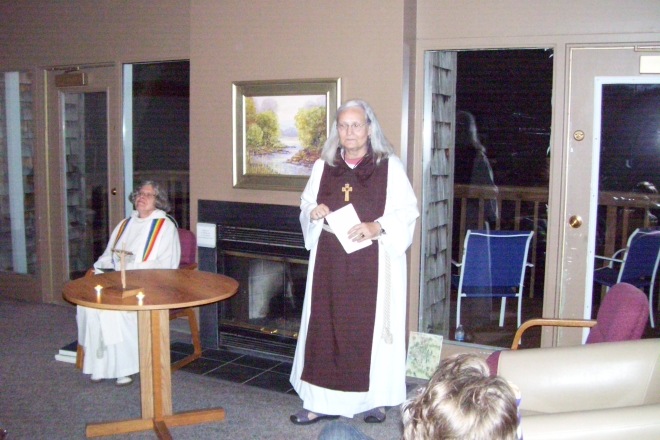 Sr. Julian, CG, gave the homily Saturday night at Mass. It was good to see her in that role. (Josh) 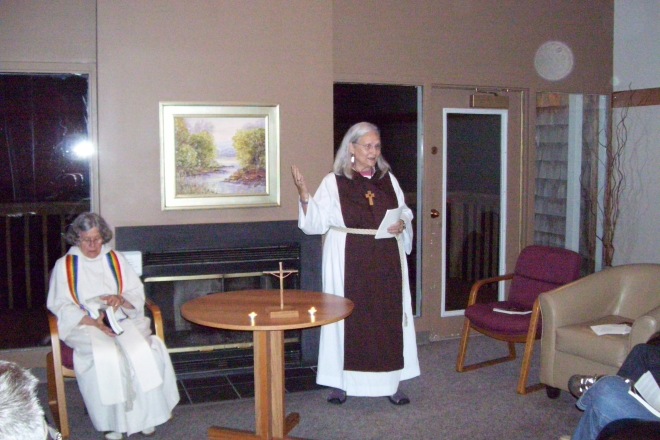 We were quite pleased with Sr. Julian’s sermon. She came prepared and looked comfortable. An important principle of our retreat was to draw on the leadership abilities of each person. (Josh)

Just because we have three pictures of Sr. Julian preaching doesn’t mean she went on at length! A homily is generally fairly brief, just one or two good thoughts well stated; the Eucharist is the main event. Sr. Julian came through just fine. (Josh)

At the offertory we placed our gifts on the makeshift altar: our handmade rosaries to give to others; some of our brother Tom’s letters to his guardian angel; and “forgiveness” slips, with a few words about troubling acts by those who trespassed against us, which we were ready to reconcile and be done with. (Josh)

Mother Gwen leads the prayer of consecration during the Saturday night Eucharist, our second, as Sr. Julian looks on. The Holy Table is crowded with all our gifts; later we burned those forgiveness slips in the fire. Gwen’s rainbow stole is knotted in celebration of a same-sex couple whose wedding she solemnized earlier in the month, the first such wedding performed openly in her diocese. (Josh Thomas) 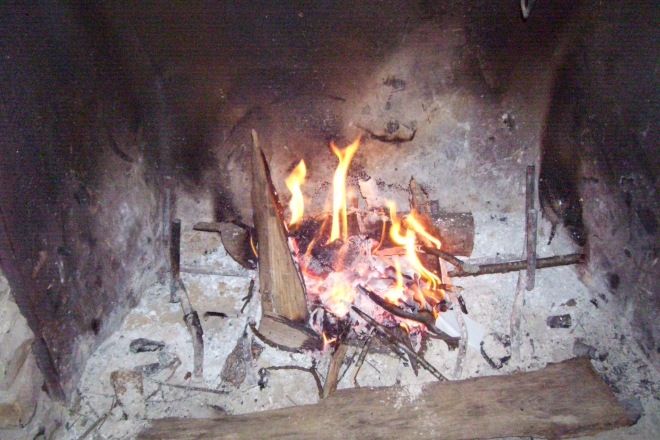 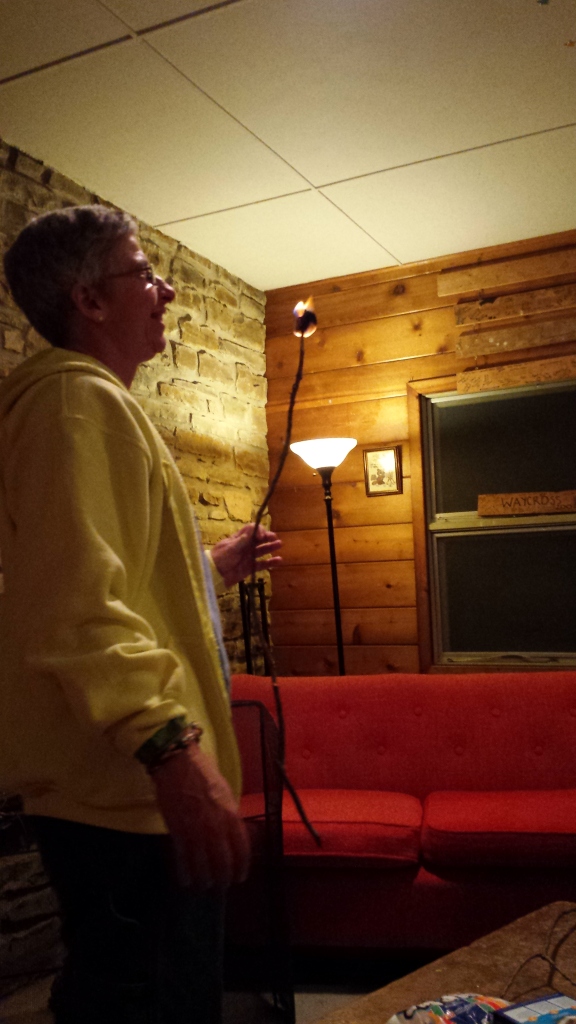 After Scotty instructed us in the finer points of roasting marshmallows for s’mores to a delicate golden brown, Maria grabbed one of those puppies, jammed it onto her stick and torched it. S’mores makers always divide into two camps like this, gourmands and gluttons. I’m with Maria, there’s nothing subtle about graham crackers, marshmallows and Hershey bars. (Linda) 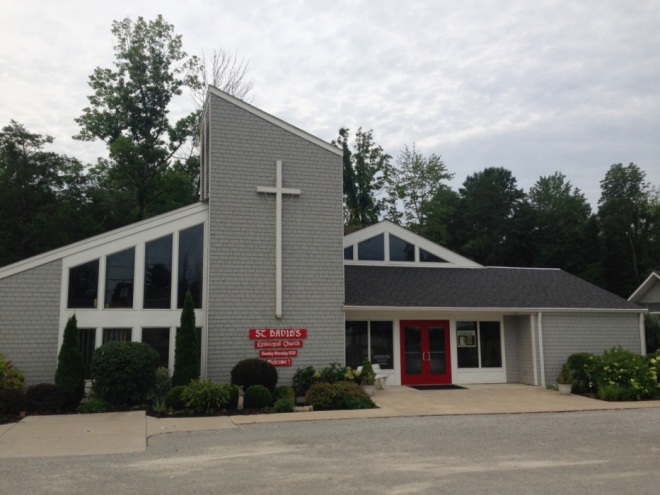 Sunday morning we traveled a few miles to St. David’s, Beanblossom for church; it sits at the corner of two state highways in the tiny village. (Diocesan photo)

After worship at St. David’s, Beanblossom with the Rev. Kelsey Hutto, also a member of our webcast group. Liturgy, music and preaching were all outstanding. Notice Joan hiding out in the back, while Josh was playing hooky in the garden. (Sr. Julian) 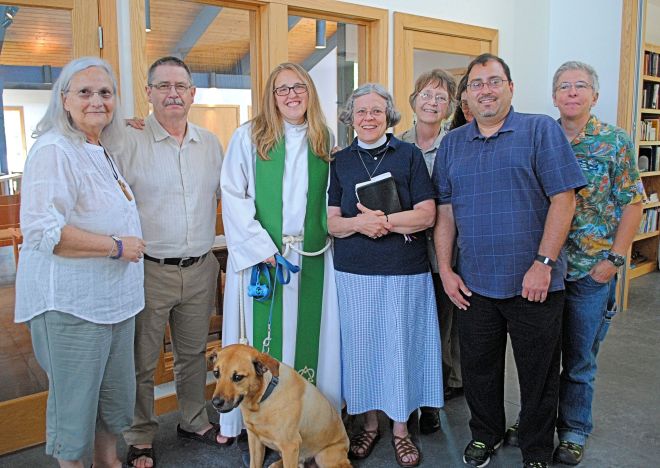 After church was the mandatory coffee hour; St. David’s has a lovely building and grounds, and the people showed us Hoosier hospitality. (Sr. Julian)